Charleen McWilliam Hearl, RN,  and her husband John McWilliam (now deceased), joined the MAI team after living ten years in Mexico City ministering with Overseas Crusade. When John joined MAI in 1994, Charleen was working as an RN in San Jose, and volunteered at MAI. She developed the Community Health Evangelism Perinatal Support (CHEPS) program. This was the beginning of a productive career with MAI. Charleen has since remarried and works alongside her husband, Pastor Alan Hearl. Let’s listen in as Charleen tells us her story.

HL: Charleen, tell us about being the forerunner of MAI’s Women’s Cycle of Life program.

Charleen: I’m a registered nurse and I had been in missionary work with my husband John going on 20 years when he began to get involved with Medical Ambassadors. My husband was working with Community Health Evangelism in the Eastern Bloc countries of Europe, and I was at home in the States working at my profession focusing on the Comprehensive Perinatal Services Program. This was a program sanctioned by the State of California to take care of low-income, pregnant women who were at risk. I was working for Santa Clara County. They were teaching me how to look at a woman’s entire pregnancy, how to care for her and her nutrition, how to care for her through the State’s health education. Many more qualified people would have liked the job, but in God’s providence, He had sent me to Latin America where I had become proficient in Spanish, and this job required that you spoke fluent Spanish.

HL: How long where you there?

Charleen: I worked there for five years. One day I said to John, “It sounds like I’m doing what you’re saying you do at MAI, except I don’t have the spiritual component.”

HL: What happened next?

Charleen: John went to Stan Rowland (the International Coordinator at the time) and told him I was a nurse and wanted to work with Community Health Evangelism. When I approached Stan, the first thing he said to me was, “I don’t need a nurse.” I said, “That’s fine, but let me tell you what I do.” When I finished telling him how I helped women to learn about their pregnancies, how to take care of themselves, be their own advocate for problems and complications, his eyes opened and he realized this could be something Community Health Evangelism could use.

HL: What did Stan say after you told him what you really do?

Charleen: He said, “Why don’t you write some lessons?” I wrote eight lessons on maternal child, pregnancy, and fetal development. When I brought the lessons back to him he said, “Well, I tell everybody to do that when they come to me, but you’re the first one that’s ever done it.” Right away he said, “I’m going to send you to the Philippines, because that’s where our experienced training teams are working, and they will be able to help you develop this CHE model. I think it will be very usable material for them.”

HL: When was this?

Charleen: 1999. Paul Calhoun (former Executive Director of MAI) was such an encourager; he looked over the lessons and right away I was Charlene McWilliam, Maternal Child Consultant. I had a desk and was soon able to retire from working at the county and work full-time for Medical Ambassadors.

HL: Were you sent overseas?

Charleen: Yes, Stan sent me to try the new lessons in Indonesia. That was the first place I taught CHEPS, Community Health Evangelism Perinatal Support.

HL: What did John think about your women’s program?

Charleen: John grabbed hold of using the women’s program. When it came for me to accompany him to his field—he was really the first one to have me teach. We went to Haiti with Bibiana Mac Leod, then an Area Coordinator. Bibiana helped translate the lessons in Creole and rewrote some of the questions to make them flow better. She said, “You should be a facilitator for this lesson. You’re not supposed to lecture.” She really taught me how to write these lessons.

HL: You were living a core value to always work as a team.

Charleen: Yes, John pulled together all the countries in his region doing Community Health Evangelism, and we had a meeting in Guatemala as a team. One of the things he wanted was for them to know about this new program.

I remember John saying, “Every day I want you to do one or two of the women’s lessons, the CHEPS lessons, with these leaders. That way they can experience how CHEPS can be used.” I remember, CHEPS was eagerly received by them. They grabbed hold of it.

After the childbirth lesson (that’s always a dramatic lesson because we act it out), I explained to them how research has shown the energy expended in the process of having a 12-hour labor and delivery is equated to running two marathons back-to-back. They were stunned. I asked the men what it would be like if they lost their wife in childbirth? What would happen to their families? It became very personal for them.

After some time using CHEPS, we realized there is much more to a women’s physical growth and spiritual maturity than the months surrounding pregnancy. We began composing a program that included the entirety of a woman’s development.

HL: Is that how Women’s Cycle of Life began?

Charleen: Yes, it includes everything, not just pregnancy. At that point, Lydia Carroll and I traveled to a restricted country to try out the new Women’s Cycle of Life (WCL) program in a class of women.

HL: What skills did Lydia bring to the program?

Charleen: Lydia was a public health nurse and very involved in volunteer mission work. We had a very successful class, and it was exciting to see how women responded to training on the different stages in their lives, not just pregnancy.

HL: Do you have a story you can share with us about that?

Charleen: We did this training with all the attendees meeting in a big, high-rise apartment building. The sponsors gave us this large, open space in which to teach our lessons, but it was visible to everybody in the building. We were trying to talk discretely about very private things, while using posters showing fallopian tubes and ovaries—very inappropriate for the culture. So, we put the posters on the floor in the middle of the circle of chairs where the ladies sat. There was a really rough-looking woman working in overalls and washing windows. She was so fascinated with our discussion that she kept moving, edging in, and bringing her ladder closer and closer so she could see what was on the floor. Finally, when one of the questions was asked, she answered it. She became an instant member of our group.

HL: What did these lessons mean to women who had never talked about such things?

Charleen: Consider a woman who gets absolutely no attention. Nobody cares about her, not even her husband. She eats only the leftovers not touched by her family, she will never have any kind of medical care, and she could be sold at the whim of her husband for less money than a cow. Her value is so low. Now consider a neighbor who comes along and teaches her a few CHE lessons and that God values and loves her. Hope is birthed that she can do something to make her life better and help her family to be in a better situation. These women are like sponges. They have suffered terribly, and so this program meets such a need for them.

HL: Charleen, what has given you such passion to work with women?

Charleen: After I became a believer, it wasn’t but a year or so later I met John. From the very beginning, John and I planned to go and give our lives to missions and work mainly in Latin America. That was our emphasis: to reach people and learn to walk in a way that was obedient to the Lord.

Throughout my Christian experience, I was called to work with women. When the door opened where I could do something in the health arena, particularly using my nursing skills, and reach women spiritually too, it felt like it came right out of my DNA. God taught me a long time ago I needed to learn to be obedient. This obedience to work with women was also my heart’s desire.

Give to support the incredible Women’s Cycle of Life program.

Read next article: Book Review of Joy in the Journey 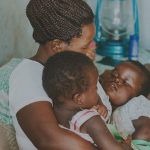